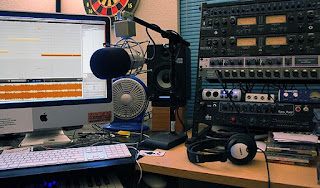 I often wonder if broadcast television is soon going away for good.  There are only a couple tv shows that I enjoy watching anymore and with Covid restricting the making of new shows and movies, I haven’t watched a live broadcast of a television show in a long time.  Sports is the exception, however most sports broadcast on television are also streamed online simultaneously, so there are multiple ways to watch most major sports broadcasts.

I’ve adapted to the lack of good shows on television by listening to and watching podcasts.  If you would have told me twenty years ago that people broadcasting themselves talking via internet streaming on YouTube or Podcast sites would be all the rage I might have thought you were crazy, but that seems where the world is moving.  And quickly.  Instead of watching television in my downtime, I subscribe to YouTube channels and podcasts that provide daily content and that’s how I consume a lot of information.  I’ve never been one to spend too much time on Netflix, but I have been known to binge shows like Breaking Bad, Sons of Anarchy and The Walking Dead.  I don’t find too much content on there that I’m very interested in anymore.

I have some local radio shows that I listen to in the car, but more and more I find myself tuning in to a podcast or an app via my phone in the car instead of listening to the radio. Some podcasts I listen to every day and others I check out when I can.  The great thing about recorded content is that you can watch or listen on your own time.  Listening live isn’t necessary in a lot of cases, but a lot of times current events are discussed and the news cycle moves so fast nowadays that it’s sometimes hard to keep up.

Here are some of the podcasts and/or channels that I listen to.    This list is in no particular order.

1)  Joe Rogan – Joe is a stand up comic and MMA commentator, but has found a lot of success with his podcast.  He’s kind of a pot head, but he does get some really good guests on his show to talk politics, current events and life in general.  I don’t listen to every episode, but if he has someone on that I’m interested in hearing from I will definitely tune in.

2)  Adam Carolla – I first started watching Adam when he was co-host of The Man Show with Jimmy Kimmel.  His podcast is a similar format to Joe Rogan’s, however he has a couple co-hosts and the format is more of a morning talk show than just an interview format.  He does have a featured guest that he interviews every episode, but there is more content to his show than just the interview.  I don’t catch every episode, but try to when I can.

3)  Nick Di Paolo – Nick is a self-described conservative comedian.  His daily podcast can be watched on YouTube.  It’s kind of a knock off of “Weekend Update” from Saturday Night Live, except it is uncensored.  Warning:  He cusses a lot, but he is also hilarious.  He will typically move from news story to news story and make fun of the people in the news.  Podcasts with comedians are a common theme with me, I guess!

4)  Brandon Tatum – Brandon has no rhyme or reason to the frequency of his YouTube broadcasts, but he has definitely developed quite a following.  He is a former Democrat police officer turned Conservative YouTuber.  He has a neat backstory and mostly talks about the latest in politics on his channel.  This is another that I don’t listen to every day, but I enjoy when I do get to listen.

5)  Jason Whitlock – Jason has joined Clay Travis at Outkick The Coverage (a sports website) to write columns and podcast.  Jason was a columnist at The Kansas City Star about 20 years ago and also had a radio show here in town for a while.  I don’t always agree with him, but he usually has a well thought out and reasonable take on what is going on in the sports world.

6)  Clay Travis – Clay is one of the owners of Outkick The Coverage.  He also has a daily sports talk show on Fox Sports Radio every morning.  He’s a “middle of the road” guy in a very liberal sports media and I’ve been following him and listening to him recently.

7)  Bill O’Reilly – Even though Bill isn’t on FoxNews anymore, he still pushes out content on social media, YouTube, and has his traditional hour long show broadcast on The First TV every night.  I don’t watch every night, but try to catch it when I can.

8)  Kevin Kietzman – Kevin started a podcast this week called “KK Has Issues.”  He posts an episode daily that is a combination of local sports and politics.  It’s been good so far and considering how horrible local sports talk is nowadays it’s bound to be a success.

There are others that I watch or listen to as they put content out, but these are the daily or “almost daily” podcasts that I listen to.  Since you know what I like to listen to, are there any out there that I’m missing?  What do you like to listen to?