Stories Behind The Photos…Dexter McCluster 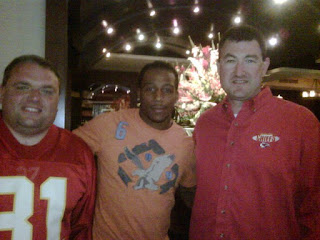 I was trying to find a particular photo in my Facebook photos and stumbled upon the photo above.  We went to a Chiefs game with some friends and Dexter McCluster had a pretty good game from what I remember, including returning a kickoff for a touchdown against the 49ers on September 26th, 2010. The Chiefs won 31-10. After the game we went down to the plaza to eat at Fogo de Chao.  Shortly after we sat down, in walked Dexter McCluster and Tamba Hali with their families.  They found a table in a dark corner, apparently so nobody would bother them.

At one point Dexter got up to use the bathroom and walked past our table.  I believe Chip told him congratulations on a great game and asked if we could get a picture.  He was very nice and obliged us.

Seeing this picture again got me curious to find out what Dexter is up to now.  Looks like as of 2019 he was playing in the arena league for the Massachusetts Pirates.  Interesting!  I can’t believe this picture was taken 10 years ago already.  I found a picture online of him returning the kickoff for a touchdown that day. Good times.. 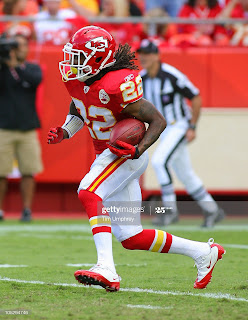