Mount Everest – Do you think you could climb it? 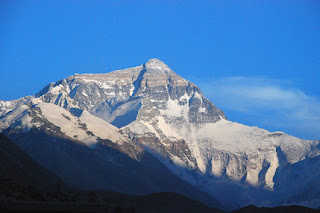 I have always been very intrigued with Mount Everest and everything that goes along with it from those that have summited the the mountain to those that have died trying.  I’ve watched countless documentaries and movies about Everest to try to figure out the drive and ambition these climbers have.  It got me wondering.  If I had the drive and ambition, is this something my body could endure?  Assuming money was no object, of course.
According to High Adventure expeditions, 5,780 people have summited Mount Everest (682 Americans) and, according to CNN, there is a 29% success rate.  There have been close to 300 deaths on the mountain.  It costs a minimum of $30,000 to climb the mountain by yourself and upwards of $100,000 to climb as part of an expedition with guides and sherpas helping you.  The cost is prohibitive to a large percentage of people that might want to try.  There’s also a high chance that you won’t make it to the top and a relatively high percentage that you may die trying.
It begs the question, if money were no object and one were to REALLY train to become a successful mountain climber, would this even be possible for the average person?  Could my body endure the elements and does my body have what it takes to attempt something like this?  Probably not, but it’s still fun to think and dream about.
I often think of other extreme sports or other sports in general and wonder if I had started at an earlier age if I would be able to be successful in those ventures.  I’ve run a few 5ks in my time and at one point I wanted to try to train to run a marathon.  But I hate running.  I mean HATE it.  So I learned early on that one was never going to come to fruition.
If I had started golfing at an earlier age, say when Tiger Woods did, could I have been a great golfer like Woods or Tom Watson?  Maybe, but probably not.  I ask friends that golf this question all the time and they scoff at me.  I’ve golfed three times in my life and have never had any training at all.  But if I did, and I had started at an early age, could I have become really good?  Who knows.
If I had decided at a young age that I wanted to be an NFL kicker one day and I practiced kicking every day from the age of five or so, might that have happened?  I already mentioned that I’m not a runner and not much of an athlete in general, but could I have been a kicker if I had really wanted to be?  Who knows.
Although the odds are slim that I have the body to be a pro golfer, an NFL kicker, a marathon runner or a mountain climber, I sometimes wonder if I could go back in time and had a do over if I could accomplish some of these things.  At the age of 47 I’m not sure I have the drive or ambition.  It’s fun to think about though.
#joeslife