My Mom and Dad and I took a short trip to Memphis last week for the Liberty Bowl where K-State played Navy.  We left on Monday, December 30th after I worked in the morning.  The game was played at 2:30 on New Years Eve.

The drive is about seven hours and 15 minutes from us if you don’t stop.  With a couple stops it ends up being about seven and a half hours.  We took a route through Springfield, Missouri and Jonesboro, Arkansas, which is pretty hilly and curvy in some areas.  Once you get out of that area, it’s smooth sailing to Memphis.

We had hoped to see the tail end of the K-State pep rally on Beale Street, but arrived on Beale just as the pep rally was ending.  We parked a couple blocks away and they had an automated machine to pay for parking.  All I had was 20’s on me for cash and put my money in the machine not realizing that the machine doesn’t give change back.  So I paid more for parking than necessary, but it wasn’t a big deal.  Just FYI in case you’re ever in downtown Memphis!

We walked over to Beale Street to see the streets filled with K-State fans, many of whom were heading home after the rally.  Beale Street is probably a two block square area of bars and restaurants, one after another.  It’s like Aggieville in Manhattan on steroids.

We all decided we needed a beer after the drive and walked into a place called the Tin Roof.  There was only bar space available so we sat at the bar.  Below is a pic we got. 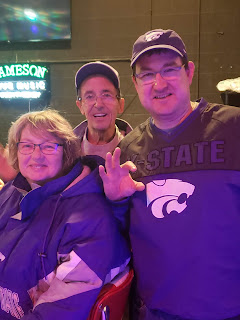 We ended up wandering the streets a little bit after that.  Visited Coyote Ugly, which was pretty dead on a Monday night.  There were girls dancing on the bar, but they were just practicing the routine for the following night.  So we didn’t stay there long.

Here are a couple more pics I got down on Beale Street.

After a couple beers we decided to head to the hotel in Southaven, Mississippi, which is about a 20 minute drive from downtown Memphis.  There are a bunch of restaurants near the hotel and we were all hungry.  One of the recommendations by the hotel was Gus’s World Famous Chicken.  We decided to try it.  I think Stroud’s is one of the best places in Kansas City to get fried chicken, but Gus’s blows Stroud’s away.  Their chicken has a little bit of a kick to it, but it’s not overpowering or anything like that.  And the chicken is tender and juicy.  I’d say it’s definitely the best fried chicken I’ve had in a long time.

I hear there is a Gus’s Chicken location in Westwood, KS now near the original Joe’s KC barbecue.  Check it out and let me know what you think!

After eating we headed back to the hotel to get some rest and get prepped for the big game the next day!  Day 2 reactions will be a separate blog post!