We crammed so much into our Memphis trip that I’m going to have to split up day two into two separate blog posts.  The K-State/Navy Liberty Bowl game started around 2:40 on New Year’s Eve.  We got up that morning and ate breakfast at the hotel and took our time getting ready to go to the stadium.  We had some beer and snacks so we decided to go tailgate at the stadium.

I asked a couple barbecue experts which barbecue places to try in Memphis.  Rendezvous, Payne’s and Cozy Corner all came highly recommended.  Rendezvous has some mixed reviews online.  Some people love it and some people think it’s highly priced and very overrated.  I knew we wouldn’t be able to visit many places because we were heading home on Wednesday, so I narrowed it down to Payne’s or Cozy Corner.

We drove right by Payne’s on the way to the stadium, so we thought we could go to it after the game since it would be on the way home.  The route to the stadium takes you through a shady part of town, but there was enough traffic and people around that we never felt unsafe.  We purchased a parking pass and drove right to the stadium and into the lot and parked less than 100 yards from the stadium.

The K-State band was warming up near us, so we walked over to listen and take some pictures and video.  My Mom’s cousin’s daughter Reagan is a K-State cheerleader so my Mom tried to find her by walking on the various buses until she found her.  We chatted with with Reagan for a bit and got a couple pictures. 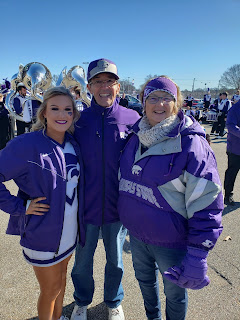 As we were saying goodbye, Willie Wildcat walked off the bus and we snapped a picture with him as well. 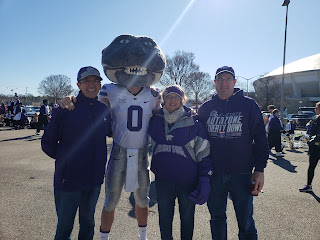 On the drive to Memphis, my Dad was reading an email from the K-State athletic department and they mentioned a pregame barbecue.  Dad called about tickets and they said they were sold out.  When we were in the parking lot my buddy Jerod called and said that scalpers were selling tickets at face value.  We weren’t too keen on paying 40 bucks a pop but decided to go talk to the scalper to see if we could get a better deal.  We walked over to the building where the barbecue was held and found the scalper.  About five minutes of negotiating and we got the tickets for 20 bucks each.  Not bad for all you can eat and drink.  So we went to the barbecue about the same time the band got there to perform.  Then we met up with Jerod and his kids and Dad.

We went right to the stadium from the barbecue.  The Liberty Bowl stadium is what I would call a relic.  It hasn’t been updated in quite a while, if ever.  It was built in 1965 and it feels like 1965 when you walk through it.  We had pretty good seats on the 50 yard line about 65 rows up.  Since we were playing Navy, there was a bunch of military style pregame “stuff” going on, like a cadet swearing in ceremony, among other things.  It was really neat.

The game itself was pretty close throughout.  Near the end of regulation the game was about to go to overtime, but Navy called a trick play with a halfback pass to get into field goal range and kick a field goal to win.  A very disappointing way to end the game for K-State fans.

The K-State athletic department estimated about 25,000 K-State fans were in attendance.  I think it might have been a bit more than that, but that’s probably a pretty good estimate.

It took us a little bit to get out of the parking lot after the game.  We drove by Payne’s Barbecue and it was closed, so we decided to head to Cozy Corner.  Part three of the Memphis blog will pick up there….