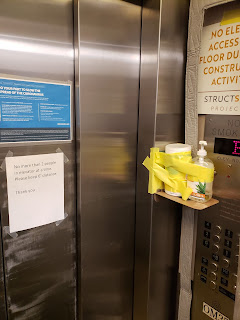 Happy day 16 of the stay at home order!  I took the above picture in the elevator at an account of mine today.  Nice temporary sanitizer dispenser, huh?

I also took the picture below.  I walked by and thought “what are those boards doing laying there?”  Then I realized that’s where the couches used to be and they had been removed.  Forced social distancing! 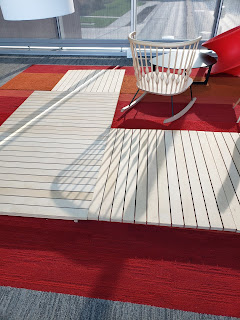 I’ve been watching the White House Coronavirus task force press conference almost every day.  The team really does seem on top of it and are communicating quite well.  It’s like watching your favorite television series.  Some episodes are good, some are bad and some are just okay.  There is one constant, however.  The press corp is insufferable.  Those that know me know that I don’t watch the news on television.  I stopped doing it quite a few years back and my attitude and the way I look at the world is completely different.  In a good way.  I still follow the news from sources I trust.  I normally watch the raw feed of press conferences from the White House and both the House and Senate leadership on both sides.  There are YouTube channels that I subscribe to that provide this information. Otherwise I just tune into CSPAN.

93 percent of the press in this country identifies as Democrat or left wing.  I used to watch the White House press corp lob softball questions at the White House press secretary when Obama was our President.  Everyone except John Roberts of Fox, that is, but he rarely got called on.  The first day of the Trump Presidency the same people lobbing softball questions turned into rude, condescending, childish vultures.  That hasn’t changed for three years.  The job of the press corp should be to ask clarifying questions or to ask questions that may not have been covered in order to give information to the American public.  Instead, this press corp is only interested in an agenda to try to “get” President Trump.  It is really sickening, especially in the time of a national crisis and pandemic.  I know this is the way things are and will continue to be, but it’s very frustrating to witness and I wish something could be done about it.  Nobody is well served by the media in this country right now.

On a positive note, it’s a beautiful day and the sun is shining bright.  I got out and did some yard work after work and it felt good to do that.  There are positive signs as far as the pandemic numbers go, so this whole thing may be over sooner rather than later.  Fingers crossed!