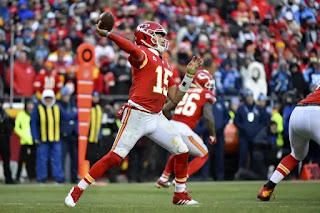 This is kind of a depressing weekend.  The weather is not great here in Kansas City.  It’s cold and there is snow on the ground.  The NFL is about done for the season and there are no games this weekend.  The good news is that the Chiefs have made the Super Bowl for the first time in my lifetime!  Mahomes mania has taken over Kansas City.  And the nation as a whole for that matter.  I hope they can finish the deal next week against the 49ers.  It will be very exciting watching a team I have followed closely for 30 years finally play in the Super Bowl.

After that, it’s NCAA basketball season for me.  The XFL is making a comeback and I’ll probably watch it but I’m sure I’ll get bored with it eventually.  It’s just not the same as college football or the NFL.  I’m going to enjoy next Sunday’s Super Bowl as much as I can.  Who knows when it may come around again.  Go Chiefs!